It was a quiet autumn evening, the sounds of the countryside long faded into the darkness. I lay in bed cocooned against the crisp night air, perched on the cusp of sleep. Sweet dreams and peaceful rest beckoned me with their alluring song.

Teetering precariously on the edge of oblivion, my senses were suddenly pulled from almost slumber to full attention. My heart quickened, the beat resounding heavily in my ears, every nerve in my body simultaneously charged with electricity. My muscles tensed and my eyes jerked open as a disturbing realisation settled on me…I was not alone in the room.

I was being watched by a patient stalker. My every move monitored and scrutinised…the perpetrator waiting for a chance to strike. Somehow this intruder had crept into my home, unseen, waiting for the opportunity to violate me. I felt vulnerable. I knew I was powerless to defend myself…my karate skills futile against my attacker’s honed and lethal accuracy. Reduced to a quivering mess I was reminded of my fragile humanity.

Sleepless torture ensued as I fell victim to hours of repeated abuse throughout the night at the hands of this relentless assailant. I suffered long minutes of torment in the darkness, waiting for the end to come. The sun’s first rays at dawn were a welcome reprise…I had survived the night. The perpetrator of the assault had fled the scene, leaving me with physical and mental scars as a haunting reminder of what had occurred…

I had been the innocent casualty of a fly-by blood sucking at the hands of a malevolent mosquito. 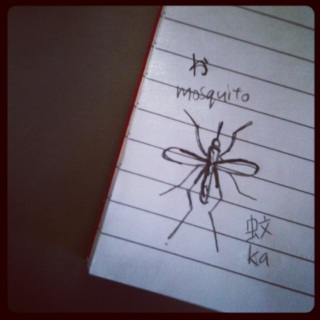 It’s vital to point out here that I was attacked by a Japanese mosquito, as I’ve come to realise that they reside in a category for more exclusive and superior to mosquitoes from other countries around the world. For starters, Japanese mosquitoes are ninja trained and have the ability to hover outside for hours, awaiting your arrival home…then they’ll stealthily slip into your home the second you open the front door. They’ll take up residence in your home, uninvited, for as long as they can safely continue to suck your blood…somehow avoiding all attempts to squash them or spray them to death with bug spray.

If these conniving ways aren’t proof enough that they are a super breed of mosquito, add the fact that they will harass you all year round and the resume of these bugs is complete. When mosquitoes in Australia have the decency to offer respite in winter from a summer of itching, Japanese mosquitoes are busily carrying out continued acts of terror against us poor defenceless humans.

Japanese bugs rein supreme in The Land of the Rising Sun and enjoy a privileged existence. I have a theory about why this is. Built like their human counterparts, Japanese bugs are highly resilient, resourceful and I’m convinced, more methodical and determined in their onslaught on the human race than we give them credit for.

I think this phenomenon brings credence to the Buddhist belief in reincarnation. It seems an easy leap of logic to assume that these bugs are simply Japanese people…reincarnated. I’m fairly sure most of the Japanese population subscribes to this notion too, give they treat these super bugs with the same respect and polite fear they show each other in daily life.

Having grown up in Australia, I have become used to coexisting with insects of all shapes and sizes and from a young age I have known how to dispose of the creatures when the need arose. Whether Japanese people are scared it’s their Great Uncle Shunji crawling up the wall or they were not ingrained with this killer instinct, I’m not sure…but whatever the reason they refuse to kill bugs and simply appear terrified of them in most cases.

It never ceases to amaze me when a Japanese person completely loses all poise and composure in the presence of a four-plus legged creature. I’ve seen it all…little girls crying because there is a tiny money spider on the other side of the classroom…an entire English lesson sabotaged by the dance of a pair of mating dragonflies…teenage boys screaming as a moth tries to escape out a window…an entire room of teachers stopping dead in awe of of the cicadas’ song in summer.

Japanese people are petrified of bugs. On the whole, I find this an appalling demonstration of cowardice and I judge them harshly for it. Having said that, I do believe there are a few instances when it is genuinely acceptable to exhibit healthy caution in the presence of these super bugs. The specific super bugs I am referring to are the ‘giant Asian hornet’ and the ‘giant Japanese centipede’. I mean, the fact that they both have the word ‘giant’ in their title infers that a certain level of reverence should be given to them at the very least.

Australia is known for it’s killer animals…creepy crawlies included, but even I’m not blasé about these two. Pretty soon after my arrival on this island I was warned about the giant Asian hornet. Given that it’s nick-name is ‘yak-killer’, it’s not surprising this bug is taken seriously. The hornet averages the size of your palm and is definitely a merciless predator. Unlike other winged stingers, this guy won’t die after he injects his victim with venom…he will continue to attack until paralysis or death occurs. Not only that, that giant Asian hornet’s venom is tissue eating which doesn’t sound like a nice way to go if you ask me.

Did I mention they can kill you? In addition to their ability to wipe out entire colonies of bees, apparently around forty people in Japan die each year from giant Asian hornet attacks…a pretty respectable statistic. If all of that it’s disturbing enough, I recently learnt that they are picky about their victims… the colour black is a red flag for these guys…and if you drink alcohol or enjoy a sweet diet then you are an even more attractive target. It’s a good thing I’ve given up alcohol, but it might be time to ease off my sugar intake and change up my wardrobe…

The giant Japanese centipede may not be a killer like the hornet (unless you are unlucky enough to have a pre-existing health problem when they strike), but these guys will give you a bite nasty enough to make you hallucinate and head to the nearest hospital. The scary thing about these centipedes is that much like the Japanese mosquitoes that stalk humans, they will welcome themselves into your home…and into your bed to get a taste of you. I have to give kudos these guys as incidents of centipede bites are so common in Japan that every police station is stocked with anti-venom…

According to Buddhism, being reincarnated as an animal is only the midpoint on the six step reincarnation ladder. If that’s the case, then the top rung must be a pretty sweet deal, because as far as I can tell, it’s a bug’s life here in Japan. I’d go so far as to say insects in Japan get treated with more fear and reverence than us foreigners…and that’s saying something.
Yes, I have decided that in my next life I would quite like to be reborn as a insect in Japan and enjoy the privileges of a super bug’s life. That is, I’d like to come back as any bug but a fly. I’ve seen how deadly accurate our tea lady is with a fly swat at school…clearly flies are not deemed worthy of the reincarnation ladder…